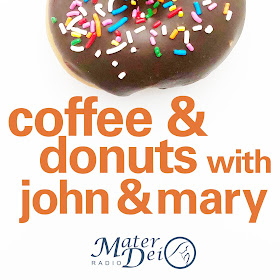 A few months ago my friend John, who works as the production manager at Mater Dei Radio out of Portland, had a crazy idea. He thought it'd be a fun thing to interview me, in my role as Occasional and Unreliable Blogger Extraordinaire at Domestic Apologist Dot Com, on the Morning Drive radio show for his station.

When he asked, I first confirmed he knew he was talking to me and not someone else infinitely more interesting, then said YES I'LL DO IT and hung up before he could change his mind.

We recorded two interviews for NFP Awareness Week, then one for preparing for Advent, and another one for family meal strategies.

Then, John, God love him, truly went round the bend and asked if I'd like to co-host a weekly radio program with him.

John's an incredibly kind person so I hope he didn't mind all the happy screams of "STOP IT" and "GET OUT" and "SHUT THE FRONT DOOR" that I excitedly hurled at him over the phone when he asked.

The rest, they say, is history, and Coffee & Donuts with John & Mary is off and running. I thought it might be helpful to do a little question and answer session about the show.

What's the name of the show again?

Do you serve coffee and donuts during the show?

No, it's a radio show. Listeners must bring their own coffee and pastries.

But what if I'm gluten free and can't eat donuts?

You've got me there. Drink a smoothie.

What do you talk about?

Headline news, the good and bad of social media, Catholic tidbits, awesome new charities, budgeting strategies for families, Catholic events in the Portland area, interviews with modern musicians... things that you could talk about at, say, coffee and donuts after Mass. Get it? GET IT?????

When are you on?

Friday nights at 7:30pm on KBVM 88.3FM in Portland, and replay on Sunday nights on the same channel at 7:30pm. And if we're really lucky, the station managers will let us fill that empty 3am slot on Wednesdays, too. Fingers crossed.

What if I'm not listening to Mater Dei radio at those times?

Catch the full podcast online on our show page!

Last question: What makes you qualified to host a radio show?